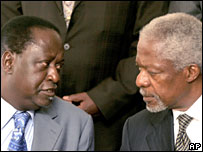 In an amazing twist of fate, something good has actually come out of peace negotiations. Since a widely deplored election a month or so ago, there has been massive waves of unrest in Kenya. Over 1500 people have died as a result of the civil unrest and widespread attacks on various ethnic groups. Even worse, they estimate that 600,000 people have been displaced by the violence.

The incumbent, President Mwai Kibaki had decided he won the election despite irregularities and some possible less-than-ethical behaviour at the polls. This infuriated the challenger, Raila Odinga. Further complicating things was the fact that these two men came from different tribes, Kibaki from the Kikuyu, and Odinga from the Luo.

The Luo have felt they were cheated out of power, and that the Kikuyu have always tried to keep all the influence for themselves. This led to violence all over Kenya, with the Kikuyu being chased out of various cities and Kikuyu-owned businesses and homes being burned to the ground. There are reports of individuals being hacked to death with machetes and other atrocities.

This was a major cause for concern, obviously! Foreign governments were surprisingly slow to react and no one seemed willing to step in. Kenya had always been the anchor of stability for East Africa, surrounded by less than stable countries like Somalia, Ethiopia, and Sudan. Having this economic powerhouse begin to slide into chaos would have tragic repercussions across the continent. So in steps Kofi Annan.

The Ghanian former UN Secretary-General has, at least in a lot of people’s opinion, managed to accomplish more in his first few months after the UN than he had in his tenure as the Sec-Gen. Annan went to Kenya and managed to convince both sides to come to the negotiating table. Normally this results in months of slow talks and really nothing gets down. But somehow, he managed to work his magic.

Somehow, the two warring sides have agreed on a power-sharing deal to bring an end to the conflict. The details are below, from the BBC article here.