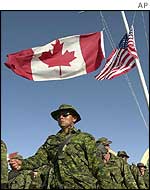 In what has to be one of the least reported news events of the past little while, the Canadian and American governments have signed an agreement to let each others military cross the border unfettered during an emergency.

This is a big deal no natter what end of the political spectrum you come from. For a lot of left leaning Canadians/Americans this type of increased military integration is a sign of American dominance. For others they are just afraid of what the practicalities of such an agreement will be.

Individuals of all stripes are worried about what this will do for the sovereignty of each country. For example, part of the fear is that of a slippery slope. Now that this plan is in place to allow military responses to “emergencies”, there is talk of expanding the agreement to cover “common infrastructure”. So incidents that occur to cross-border highways, bridges, oil pipelines etc may allow for a military response for either country.

There are those in Canada who fear that the US military could come sweeping across the border for any little thing. And they are not alone in their fears. There are those in the US who worry that this integration comes with the frightening prospect of an eventual North American union. Whether or not this is a good thing is debatable, and one that will probably be explored down the road.

However, one interesting point that was brought up is that these “foreign troops” that respond (Canadian troops in the US or vice versa) will likely not be bound by local laws. This could cause considerable amounts of trouble, because Canadian troops not bound by American law may not respond appropriately, or the same could be said in the opposite scenario.

Either way, it is interesting that the majority of the media and the government of Canada has remained remarkably silent on this particular agreement. Either it really is not that big a deal, or they may be just be afraid of the backlash.