As you’ve all been hearing, Zimbabwe isn’t exactly in the best condition ever.Â  The recent elections were a huge slap in the face to Robert Mugabe. For the first time, this hero of the revolution has had a major setback.Â  Instead of the suspiciously large victories he’s been used to, Mugabe and his Zanu-PF party actually managed to lose.

That’s nearly unheard of in this country.Â  Zimbabwe is a place where election fixing, intimidation and other questionable practices have reached a new level of art.Â  The opposition has been beaten, arrested, outlawed, all kinds of things.

Mugabe has always maintained a strong grip on the armed forces and uses them to enforce his will.Â  Even more worrisome is his practice of using “war veterans” from the war for independence,Â  and youth members of his party to harass and intimidate voters.Â  Of course this is all denied, but seems pretty well documented in international circles. 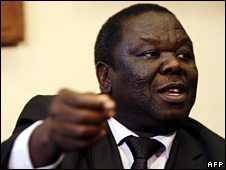 And throughout it all, Morgan Tsvangrai has been a huge pain in Mugabe’s ass.Â  The leader of the main opposition (the MDC) has himself been bloodied and has had a tough go of things, and still refuses to give up.Â  Immediately after the election, he declared victory and steadfastly maintained that his party, combined with that of another opposition party had won enough to take away Mugabe’s majority in parliament.

Since then it’s been a tense time.Â  Mugabe has been saying that Tsvangrai may have beaten him in the actual presidential election, but not by enough to win outright.Â  Instead, they need to go into a run-off.

The reason this caused such a big issue is the fact that there was a huge delay in releasing the tallies of the votes.Â  It took days before any results were officially released.Â  Some independent monitors released what they could, but these were spotty at best.Â  Then came the ridiculous recount procedure that involved over a dozen seats. Interestingly enough, the recount still wound up with the opposition taking over a majority in parliament.

Finally, TODAY, more than a month after the election, the BBC is reporting that the official Zimbabwe Electoral Commission has said that Tsvangrai had won the initial vote.Â  He got 48% of the vote.Â  2% less than was needed to avoid a run-off.

Now this number is clearly questionable, but the sheer fact that they’re even letting people know that Tsvangrai won at all is a huge step.Â  Hopefully this will be the tipping point that ends up with Mugabe leaving.

Now as a quick background, Mugabe has pretty much run this country into the ground.Â  He started off as an incredible, inspirational leader.Â  But things slowly went downhill.Â  He was hell-bent on this policy of “land reform”, which basically meant confiscating land from white farmers and redistributing it.Â  Instead of giving it to the poor and dispossessed as he promised, he gave it to his cronies.Â  He used this land to help keep his grip on power and ensure loyalty.Â  This has caused food production to plummet and the economy to tank.Â  Unemployment is high.Â  Inflation is over 100,000%.Â  That’s not a typo.

And the worst part about all of this is no one is even sure if Tsvangrai is a good leader.Â  He’s a former union leader who became a politician.Â  I’m not sure if he’s capable.Â  This is one of those moments that’s become increasingly common (or so it seems lately), where it’s less a vote for a candidate and more a vote against the previous system.

Now we just have to wait and see what happens with the run-off.Â  Just keep your fingers crossed that we won’t see the same violence we saw in Kenya.

One Reply to “Zimbabwe is a crazy place”