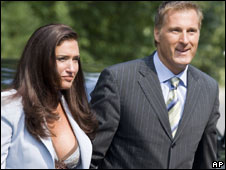 Canada’s political scandals are usually pretty small scale. Our money scandals are $100 million, which is probably nothing when comparing to our giant neighbours to the south.

Still, for those of you who haven’t been following the controversy, Maxime Bernier, Canada’s foreign minister has just resigned.

The whole thing started a few weeks ago when it became public that Bernier had been dating a woman named Julie Couillard. Ms. Couillard, who has gone on a media rampage lately at how her name has been ‘dragged through the mud’, has ties to the criminal underworld.

In her past, before dating Bernier, she had dated one Hells Angel and eventually married another. One of those two men was apparently in the inner circle at the top of the Canadian organization of the Hells Angels.

Bernier had been a dumbass during this whole adventure. He took her to a secret military base in the United Arab Emirates, and generally dealt with pretty confidential matters around her. I’m usually of the opinion that private matters should stay private. If he hadn’t been taking her on these trips overseas, I don’t think I would have cared who he was dating. The issue is that he just handled the whole thing quite poorly.

Now, Bernier has stepped down entirely. He had actually let a very confidential document at Couillard’s house. This is pretty unacceptable for any position, let alone foreign minister. For a while earlier, the Conservative government had been maintaining a “it’s none of our business” approach. Now that Couillard’s set to speak to the media openly, Bernier was quick to step down. I guess this is to avoid any scandal that could arise.

I doubt this will bring down the Conservatives, but the Liberals will definitely try to capitalize on this the way the Conservatives used the sponsorship scandal. I think Canada may be heading to the polls within the next 6 months.