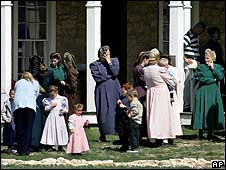 As we reported on a week ago, a court in Texas had made the first step by stating that the children in a polygamist compound in Texas had been illegally seized.Â  At first, this only meant an appeal, but now it seems like the whole case has collapsed.

The Texas Supreme Court has said that Child Protection officials, and the state government in general, had failed to prove that anything untoward was going on that the polygamist compound.Â  There wasn’t adequate proof that the children were in danger, and therefore the state had no right to seize them.

Because of this finding, the 400+ children that were seized from the FLDS sect are being returned to their parents.Â  The only catch is that the parents must take parenting classes and not leave the state.

I’d like to believeÂ  that nothing bad had happened to these children at the compound, in which case maybe this isn’t such a bad thing.Â Â  Since the whole raid on the sect was made because of a phone call from a girl, it’s disturbing that no one has been able to find this mystery caller.Â  It almost makes me feel like maybe this whole thing was blown out of proportion.

One Reply to “Children of polygamist sect being returned”