A few weeks ago, the Wall Street Journal ran a pretty interesting article about what they call the “Clinton divorce”. This will be what they see as the inevitable split with the party if Clinton is denied the nomination.

Already we saw fractures appear in the way the party was dealing with the issue of who the candidate should be. When Bill Richardson came out in support of Obama, for example, Bill Clinton was practically frothing at the mouth while he raged about what a traitor Richardson was.

This piece is not exactly unbiased, but is still a fascinating look at the situation, especially as it was written back on May 9th. 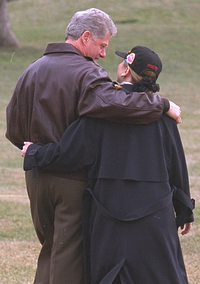 “Slowly but surely, these Prisoners of Bill and Hill are now walking away, urging Mrs. Clinton to leave the race. Chuck Schumer damns her with faint support by saying any decision is up to her. Columnists from the New York Times, which endorsed her when she looked inevitable, now demand that she exit so as not to help John McCain. With Mr. Obama to ride, they no longer need the Arkansas interlopers.

If the Clintons play to their historic form, they will ignore all this for as long as they can. They will fight on, hoping that something else turns up about Mr. Obama before the convention. Or they’ll try to play the Michigan and Florida cards. Or they’ll unleash Harold Ickes on the superdelegates and suggest that if Mr. Obama loses in November she’ll be back in 2012 and her revenge will be, well, Clintonian.”

I just hope fear of revenge won’t affect voting choices from the superdelegates. Whoever they do choose should be chosen based on their chances of success, not because they are the most vicious in retribution.