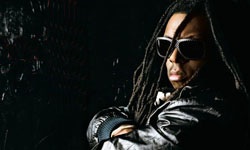 This is barely worthy of 4080 News, but it’s at least a little entertaining.Â  Apparently Lil Wayne just got hired to blog for ESPN.

That’s right, Weezy will now be serenading you with his ridiculous opinions about all things sports-related.Â  As you can see here, he’s all over the place.Â  And frankly, it’s not all that terrible.Â  He shows a surprisingly human side of himself, as you can see here wherehe talks about his fantasy sports teams.

Not something you generally think of with celebrities, but apparently they can be just as nerdy as the rest of us.

My fantasy team is now 2-1. I’m fifth place in the league right now but movin’ up. I won my last game by a great margin. I had to drop Ben Roethlisberger ’cause he don’t look like he’s doing nothing any time soon. Had to do it. I picked up Kurt Warner because he has more to prove than Ben. He’s stepping in to Matt Leinart’s place, and he’s still kind of competing. You want guys like that, guys who are motivated.

I grew up playing football. Believe it or not, I was a fullback. When I was nine, ten, eleven, I was a great blocker. I knew how to block real good and the other kids didn’t. So there I was. One game when I was ten years old we were on the goal line about to score, and coach called the play for me. I was supposed to go one way, but I ended up sneaking around the other side on a sweep. Everybody thought I was already tackled. The ref was already blowin’ his whistle. But I was still up and I stutter stepped one way and beat the last guy trying to get me and scored that touchdown. That’s my favorite sports memory for myself.

Either way, keep on eye on his blog at ESPN the Mag if that’s the kind of thing you’re into.

One Reply to “Lil Wayne has a new job”