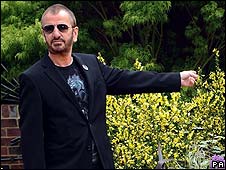 Seriously, there’s no pretending that ex-Beatle Ringo Starr is any good.Â  Despite the fact that he was the least popular, and possibly the least talented of the Beatles, he’s now officially made himself a bad celebrity.

Ringo has officially come out to publicly state that he will no longer sign any autographs and doesn’t want any fan mail.Â  In fact, he’s apparently even said he’ll throw away any fan mail he receives in the future.

“Please do not send fan mail to any address you have,” he said in a video message on his website.

“Nothing will be signed after the 20th of October. If that is the date on the envelope, it’s gonna be tossed.

“I’m warning you with peace and love I have too much to do,” the 68-year-old drummer said.

Honestly, I get that it must be tough to be famous.Â  It’s not the easiest thing in the world to have people constantly bothering you to sign things.Â  Sure.Â  But I find there’s a big difference between getting approached on the street/chased by paparazzi, and another with getting fan mail sent to an appropriate address (maybe your management company?).

And sure, not all celebrities really sign everything, maybe most get their interns to do it.Â  But at the very least, respect the people that are your success.Â  Give them the illusion that you care.

So frankly Ringo Starr,Â  I don’t think you’ll have such a problem with people sending you a ton of fan mail anymore.Â  If you really had all that many fans to begin with.

5 Replies to “Ringo Starr is uncool”